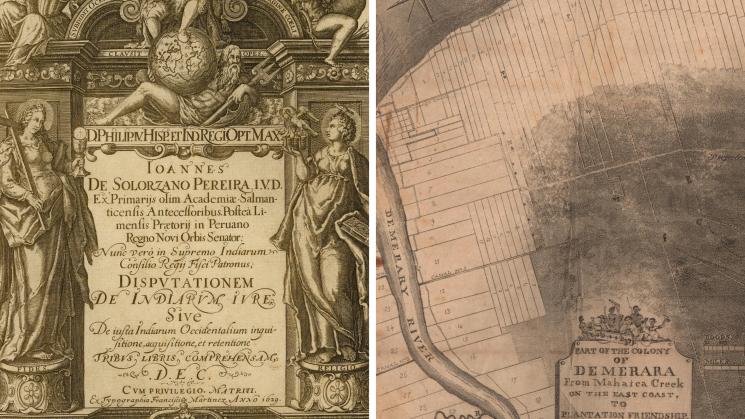 Please join us for presentations by JCB fellows Angela Ballone and Catie Peters.

This talk offers an overview of a new project focussing on the circulation of legal treatises from the Hispanic world into North America during the late 18th and early 19th centuries. Starting off from a few mentions to the Spanish jurist Juan de Solórzano Pereira (1575-1655) in some of the works by Massachusetts lawyer and patriot James Otis Jr. (1725-1783), Scotman and London agent for South Carolina James Abercromby (1707-1775), and Florida congressman Joseph M. White (1781-1839), this project bridges across the North and South Atlantic by focussing on the circulation of legal doctrine in hitherto understudied contexts. By looking at the history of acquisitions within the John Carter Brown Library and other US historical institutions, the circulation of printed material within early Americas and that of people crossing over the “border” of the British and Hispanic Atlantic, the project aims at looking at the first constitutional era in novel, unexpected, ways.

Within fifteen years of de jure emancipation, Afro-Caribbean people in colonial Guyana had amassed an estimated 1 million pounds sterling of capital. Making advance payments, they acquired small acreage adjacent to the plantations where they worked as well as collectively purchased estates. Their properties were primarily located along Guyana's coastal strip, originally reclaimed by enslaved people who had moved at least 100 million tons of soil to build polders, protected by dikes. As a result, water management required capital and centralized infrastructure, a fact that the colonial government understood but chose not to fix, thereby exposing landowners to water's eroding force. Nevertheless, having already labored as water engineers for cotton, coffee, and sugar plantations, emancipated people understood what drainage on their new properties would entail, and, in spite of the risks, still decided to purchase land for the material self-determination that it could afford. Following Dionne Brand's theorizations of water as sovereign power, imagination, and memory, this presentation considers how emancipated Afro-Caribbean people built lives in and against water in the years after 1838.

Title page of [De Indiarum jure] Ioannes de Solorzano Pereira I.V.D. ...
Part of the Colony of Demerara From Mahaica Creek on the East Coast, to Plantat…