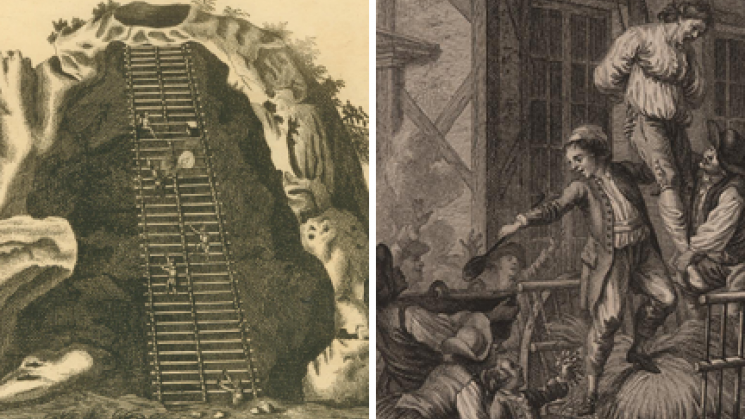 Please join us for presentations by JCB Fellows Arinn Amer and Sarah Kennedy.

This talk combines readings of JCB materials from two different sections of my dissertation, which connects the tar and feather violence of the founding era to the structures of colonial culture. First, I use sixteenth-century imperial writing to recount tar's surprising centrality to early English colonization schemes. Second, I analyze metropolitan depictions of tarring and feathering on the eve of the American Revolution to demonstrate how British printmakers, drawing on metaphors of gang rape popularized in the political satires of the period, advanced an incisive interpretation of these attacks as sexual assaults that engendered intimacy between their perpetrators.

This presentation explores the fluid social realties of indigenous silver refiners at Trapiche Itapalluni, a colonial silver refinery located in the western Lake Titicaca Basin of southern Peru (1650-1750 CE). Using sources from the JCB, including mining treatises, legal petitions, visitas, and 19th century travel accounts, I provide a documentary perspective to the material remains recovered from households at Trapiche. By weaving together both archaeological and historical data, I will present a bottom-up perspective to the silver mining economy of colonial Peru to demonstrate how rural silver refineries functioned as locations of economic opportunity for marginalized populations.