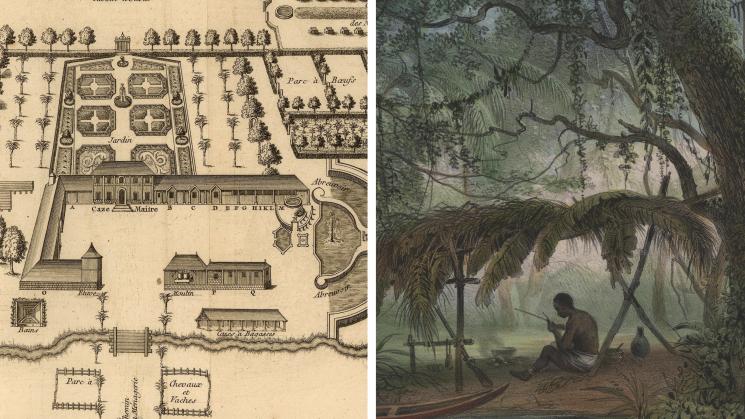 Please join us for presentations by JCB fellows Oliver Cussen and Greg O'Malley.

"The Gum Atlantic in the Age of Revolutions"

This talk will consider the effects of the Seven Years War on French commercial imperialism through the lens of the gum trade. A valuable and strategically important commodity, acacia gum only grew in the Senegal river valley, to which France had lost privileged access in the 1750s. After the war, colonial administrators considered projects to recover the gum trade-not in Senegal, but in Guyane. In west Africa, the French had been commercially, politically, and ecologically dependent. Guyane, by contrast, was seen as a new and fertile frontier, conducive to agrarian improvement and discipline, and even the cultivation of Senegal's gum trees. These aspirations encouraged a succession of aristocratic companies to govern French trade in both Senegal and Guyane from the 1760s down to the Revolution, sending resources from one side of the Atlantic to the other while profiting from the booming gum trade. Through gum, this talk suggests a revisionist account of the environmental, intellectual and economic dynamics of French commercial imperialism at the end of the old regime.

"The Escapes of David George: An Odyssey of Slavery and Freedom in the Revolutionary Era"

"The Escapes of David George" presents a biography of a man, born a slave in colonial Virginia, whose repeated escape attempts made his life a remarkable odyssey-with stints in a backcountry settlement, various Native American communities, a South Carolina plantation, and eventually evacuation from the United States (and emancipation) with the British Army during the Revolution. Because his struggle against slavery spanned the revolutionary era, his story offers a counterweight to the litany of biographies of white political leaders. Instead of a fight for political freedom from Britain and monarchy, George's life presents a parallel quest for freedom from American slavery. To achieve his independence, George fled the United States in the moment of its creation.