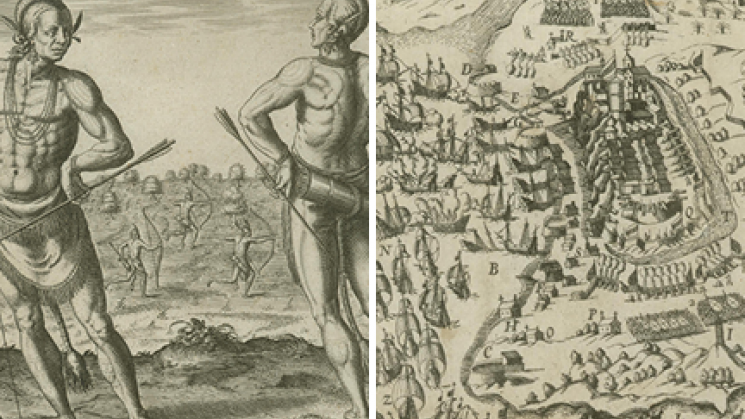 Please join us for presentations by JCB Fellows Peter Olsen-Harbich and Arthur Weststeijn.

Peter Olsen-Harbich (The College of William & Mary, Alice E. Adams Fellow) presents "Petty Kings, Roitelets, and Reguli: Diminutive Monarchy and the Political Anthropology of Early Modern Europe's Conquest Theory." This talk will survey the vocabulary used by the explorers and authors of late Renaissance Europe to describe indigenous leaders in North America. It insists on the pervasive relevance of the Latin concept of diminutive monarch, regulus (pl. reguli), in conceptions of New World societies articulated by European travelers and intellectuals in the early contact period. This talk focuses most particularly on the central place the concept of diminutive monarchy occupied in plans for North American conquest, and explores the significance of its primary implication: the existence of ordered rather than anarchical society in the New World.

Arthur Weststeijn (Utrecht University, Helen Watson Buckner Memorial Fellow) presents "Empire in fragments: Transatlantic news and print media in the Iberian world, c. 1600-1650." The first half of the seventeenth century saw the rise of printed news media, which allowed ever wider audiences increasing access to information from abroad. This talk will explore the transatlantic dimensions of this new media development in the Iberian world. Examples of news printed in Lima, Mexico, Madrid, Seville, Barcelona and Lisbon show how news circulated and how publishers and authorities used print media in the polycentric Spanish empire. On the one hand, the printing of news could serve to create authority and a sense of contemporaneity; on the other, it highlighted local distinction and resulted in doubts about the "official" story. In short, transatlantic news fomented as well as fragmented imperial rule.