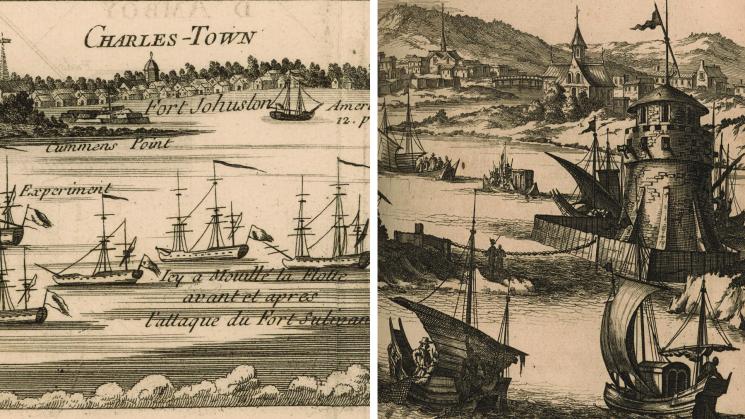 Please join us for presentations by JCB fellows Samuel Diener and Leonardo Moreno-Álvarez.

Scholarship on maritime travel narratives has often focused on the way that they construct individual subjects: eyewitnesses, experts, explorers, characters, memoirists, even quasi-novelistic protagonists. Yet the texts of these tales seem to run in a different direction. When, for example, William Dampier describes the “making” of a navigational mark at sea, he uses the first person plural—

“We supposed it to be Volcan Vejo by the smoke which ascended from its top … we steered in north and made it plainer, and then knew it … [we] brought this mountain to bear”

This project asks what we might learn about 18th-century practices of reading by taking this textual phenomenon as an interpretive starting point. We may find the reader gazing at the coastline of distant continents not through the perspective of a specific, concrete, individual sailor but through a kind of multiply-embodied point of view: one that enables him or her to trace the imagined communities of the nation through moments of collective vision, reaching for moments of collective recognition.

"Oceans of paper: the flow of maritime information in the seventeenth-century Spanish Caribbean"

What did the seventeenth–century Spanish Caribbean look like from the deck of a ship? Did that view fit the one that policy–makers in Spain received from the books and pamphlets published during the same period? While it is undeniable that by 1650 the Spanish State was in the middle of a deep political and fiscal crisis, we are only beginning to understand how different sectors in the Iberian Atlantic reacted to the crisis. In this talk, I argue that reading news pamphlets (relaciones de sucesos) in conjunction with contemporary navigational and economic treatises presents a view of Spanish imperial decline that differs from more traditional accounts. Naval commanders, Atlantic merchants, and regional elites interrogated the causes for the decline and, in some cases, proposed specific solutions for it, showing that the political economy of the Iberian Atlantic was more dynamic, albeit fragmented, than previously thought.