Joan Apple and the Naming of America 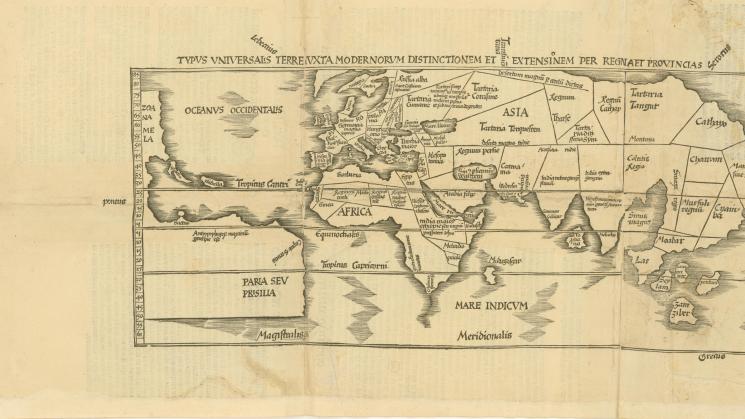 As fellow at the JCB library during the summer of 2008, I examined the documentation and worked on preparing an English critical edition and translation of the first book published on the discovery of America, the Libretto de tutta la nauigatione de Re de Spagna de le isole et terreni nouamente trouati (Venice, 1504), abbreviated Libretto—little book. I also worked on a critical comparison of the Libretto with four allied documents, in chronological order, Paesi (1507), the Decade of Peter Martyr included in Legatio Babylonca (1511- abbr. DON11), Summario (1534) and Trevisan’s Lettere (1892). As I examined these books, I noticed an interesting explanation for a mislabeling of North America that has puzzled cartographers for centuries.

The map above is derived from the Libretto and illustrates the remarkable confusion created by an anonymous scribe. The edition of the Lettere, edited and translated by Angelo Trevisan (Secretary to the Venetian Ambassador to the Catholic Kings, Domenico Pisani), was not published until 1892, even though it was written in 1501. In the second chapter of Lettere, the scribe translates the abbreviated text of Trevisan, but makes a serious mistake when he misreads the name given by Columbus to Cuba the first time he saw it in 1492. Columbus named the island Juana, in honor of the hereditary prince of Spain, Juan. Trevisan refers briefly to Columbus’ doubt about whether Cuba was an island; thus he follows the name Zoanna—Venetian for Juana—with an adversative, ma –but—and an article, la –the—which the scribe misreads as one word mela –apple—and calls Cuba Zoanna Mela—Joan Apple. Through the editorial success of Paesi, this misnomer, the result of an error by the scribe of the Libretto, ended up in the map drawn by Gregor Reisch and published in the Margarita Philosophica by Johannes Gruninger, at Strasbourg in 1515. In it you can see that Zoanna Mela—Joan Apple—designates the North American landmass, a labelling which has caused confusion to subsequent generations of scholars.