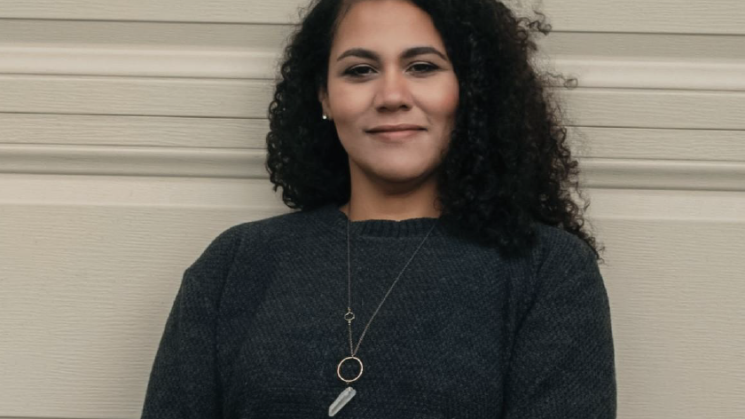 The Brown University Library and the John Carter Brown Library are pleased to announce Kimberly Toney as the inaugural Coordinating Curator for Native American and Indigenous Collections. Kim’s first day will be July 18, 2022.

Kim is a member of the Hassanamisco Band of Nipmuc and is currently Head of Readers’ Services and Director of Indigenous Initiatives at the American Antiquarian Society. During her time at the American Antiquarian Society she has streamlined reference workflows, implemented and managed the Aeon collection management software, coordinated the Society’s undergraduate seminar in American Studies, developed the Indigenous Engagement Initiative, and co-curated several digital exhibitions; the most recent is Reclaiming Heritage, Digitizing Early Nipmuc Histories from Colonial Documents, which launched in November, 2021. Kim has a masters degree in Urban Affairs & Public Policy with a concentration on Historic Preservation from the University of Delaware and a bachelor’s in Art History from the University of Rhode Island.

Brown University is committed to advancing research, teaching and engagement with the social, cultural, artistic, ancestral and heritage, legal and political aspects of Native American and Indigenous peoples in both the historical and contemporary periods.

Amanda Strauss, Director of the John Hay Library, notes that Kim’s appointment heralds an important collaboration between two world-class institutions: “Establishing a permanent, joint position that focuses on Native American & Indigenous collections at both the John Carter Brown Library and the John Hay Library furthers our shared commitment to ensuring that our libraries are sites of ethical, engaged, and culturally-centered collecting and scholarship.”

Dr. Rae Gould, Executive Director of Brown’s Native American & Indigenous Studies Initiative, was instrumental in helping shape this new position in support of the university’s commitment and the libraries’ collaboration. Karin Wulf, Director and Librarian of the John Carter Brown Library, spoke for the library’s staff and Board: “We are delighted to welcome Kim, an outstanding professional who has innovated important programming in Native American and Indigenous Studies, to the JCB. And we’re equally delighted to be partnering with Brown University Library, reflecting our joint commitment to this essential focus.”