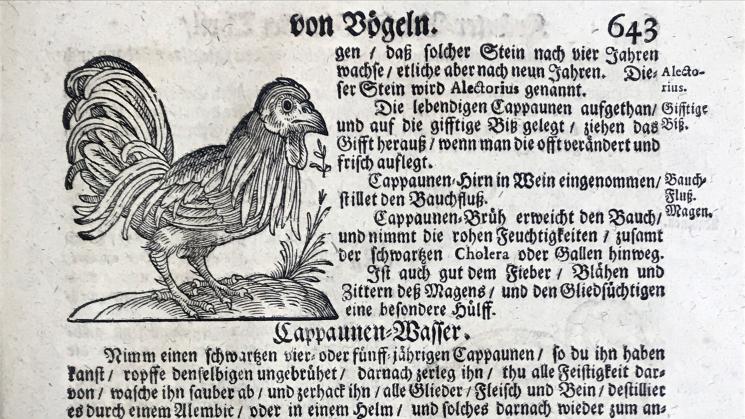 Comprising over 750 pages, this extensive overview of natural history was first printed in Latin under the title “Naturalis historiae opus novum” in Frankfurt in 1551 (not held by the JCB) and periodically reissued in enlarged editions until the 18th century, the last edition recorded by the VD18 in Ulm, 1765. Adam Lonicer (or Lonitzer) was a physician based in Frankfurt; this 1703 edition was translated and enlarged by fellow Frankfurt physician, Peter Uffenbach (1566-1635).

The JCB has many such works on natural history but this work is notable for containing approximately 800 in-text woodcuts depicting the process of distillation, gardening, and various plants and herbs including many New World varieties such as aloe, balsam, guaiacum, potatoes, sarsaparilla, and sugarcane with the directions for planting and harvesting (Krafft und Würkung). A separate section covers fauna describing and illustrating mammals such as the hedgehog (Igel), porcupine (Meer-Igel), birds such as the turkey (Indianischer Hahn) parrots (Pfittig or Papagey), and fish such as the scorpion fish (Meer-Scorpion). Smaller sections depict reptiles, metals and minerals, and other substances such as rubber. More than a few entries are preceded by the word Meer- (ocean), indicating a foreign or overseas variety of that entry.

Wherever possible, the authors have provided not only the German name, but also the Latin, Greek, French, Italian, and Spanish terms for the items. These kinds of Pre-Linnean natural history acquisitions, especially when so handsomely illustrated, allow researchers working on topics such as medicine, pharmacy, and ecology to see how ideas and depictions of such New World plants and animals have changed over time.

Adventures in Cataloguing is a monthly feature written by Rare Materials Cataloguer, Allison Rich, which will highlight a freshly catalogued item, which she considered particularly interesting or challenging.