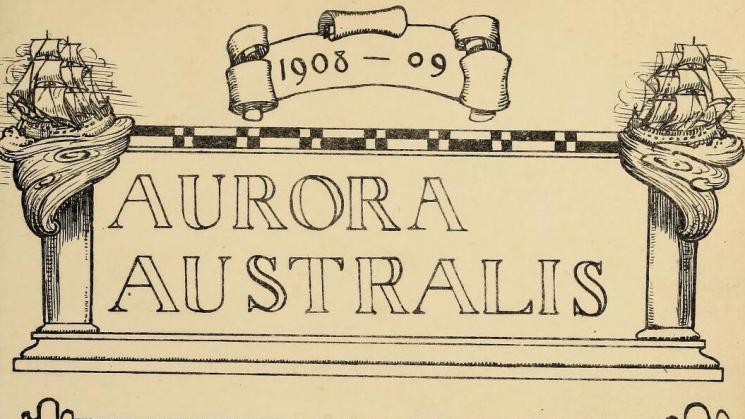 The Aurora Australis, printed at the sign of 'The Penguins' Joyce and Wild during April through July 1908, holds the distinction of being the first book printed in the Polar regions. It was produced at the winter quarters of Ernest Shackleton’s British Antarctic Expedition, which departed in 1907. Comprised of loose sheets, and consisting of narratives, essays, and poetry, it was laced into wooden covers made of the packing-cases which held the provisions for the expedition. There are 88 extant copies, 84 of which have been examined by the Antarctic scholar and collector Robert Stephenson; scholars generally estimate the number printed to be 100 or less. Because of the lack of numerical designation of the printed copies, most are known by what is printed on the boards which served as the bindings. George Marsden produced the title page colored lithograph and the series of etchings contained within the volume.

Copies only very occasionally come up for auction (the most recent sold on September 25th, 2018 at Bonham’s in New York for $97,500). The JCB’s copy, known as the “[Ste]wed Kidneys” copy, was acquired partly with the assistance of the Metcalf Fund and partly through the gift of Bradford F. Swan in memory of Lila L. Swan in 1967. While most of the Swan collection was transferred to the John Hay Library, the Aurora Australis was kept at the JCB because of its relative rarity even though our acquisitions guidelines would normally classify it as out of the JCB’s carefully-defined scope.

History of the Book, English