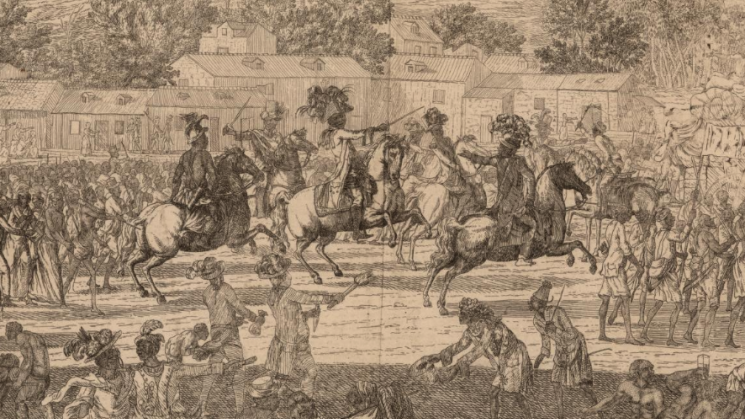 Boquet made at least three paintings of the explosive events of the Haitian Revolution as they were taking place, and before he lost almost everything and returned to France in the 1790s. All three paintings were later engraved by Jean-Baptiste Chapuy, and there is evidence that the three prints were then hand-colored and sold together as a set as early as 1799.

The three prints are now scattered amongst repositories all over the world. The rarest of the three is the unfinished proof of the print of the “Passage des onze jours de Pillage de la ville du Cap” held by the JCB, engraved (or possibly etched) by Boquet, presumably before his collaboration with Chapuy. The collections of Duke University, the only other repository so far identified as holding this image, contain a watercolor with an almost identical title, very likely the original upon which the JCB print was based.

All three prints are exceptional graphic primary sources: one providing first-hand evidence of the burning of plantations on the northern plain of the colony in 1791, and the other two of the burning and sack of Cap Français in 1793, pivotal events of the Revolution that culminated in the issuing of the first emancipation proclamation of the Atlantic world. These arresting images are still quite Europeanized representations of the complete overturning of the social, political, economic, and racial orders contained in the slave-based plantation society of Saint-Domingue, soon to become the Republic of Haiti; they merit far more attention from art historians and historians of the Haitian Revolution alike.

You can close the 'media information' panel and zoom in to see the print in full.