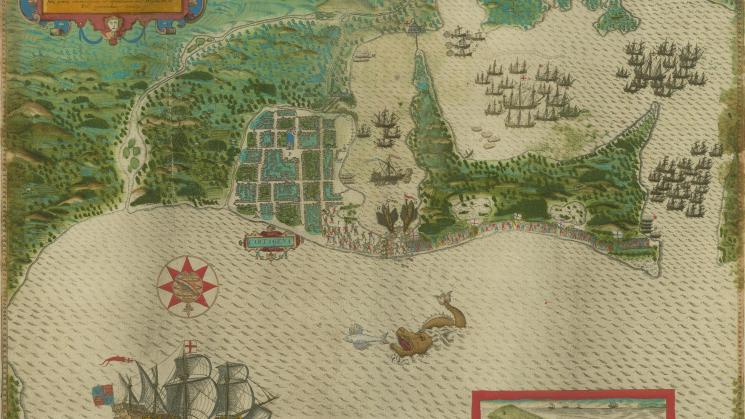 This vibrantly-colored view of Cartagena’s harbor is one of four town plans created by the Italian artist Baptista Boazio to memorialize the raids on these towns carried out by Francis Drake during his 1585-86 voyage to the West Indies - the other plans, also in the JCB map collections, are of Santo Domingo (Hispaniola), St. Augustine and Santiago, (Cape Verde). The maps were drawn to accompany Walter Bigges’ 1588 account of Drake’s voyage, entitled A Summarie and True Discourse of Francis Drakes West Indian Voyage, although they were also issued separately.

While town plans of the colonial Americas hold particular significance for the JCB because of the strengths of our collections of this cartographic genre and our ongoing efforts to expand our holdings, these particular maps represent a rich resource for understanding the early colonial Caribbean. For example, recent JCB Fellow Leonardo Moreno Alvarez has studied the unexpected presence of three Mediterranean galleys in the middle of this map of Cartagena. Cartagena had the longest lasting galley squadron in Atlantic world (it endured until 1620), which served to defend against pirates, often depending on the labor of Muslim and indigenous slaves and criminals. The galley system was wrongly assumed to cheaper to maintain than the more typical galleon.

Little is known about Boazio himself, other than he was an Italian resident in London in the 1580s who participated in Drake’s expedition, but the vivid maps themselves influenced subsequent cartographers from Abraham Ortelius on. Equally they show the involvement of others: each of the four harbor views features an emblematic exotic animal realistically rendered at the bottom of the engraving (an iguana in the case of the Cartagena map), evidence of contributions by John White, the artist who produced equally powerful drawings of the Roanoke colony.