Exploring Quina in the JCB Collections 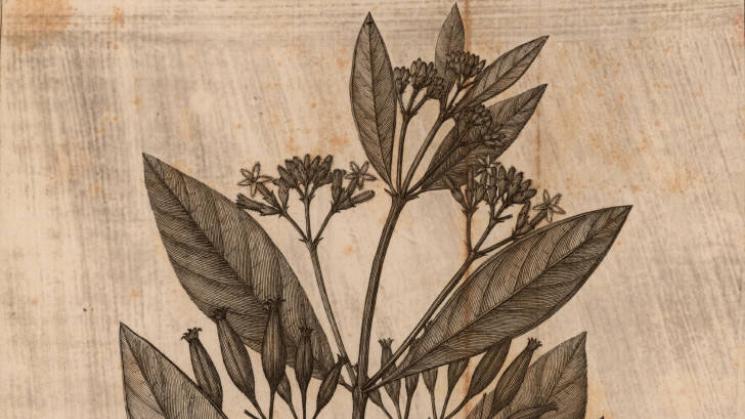 What would our world today be like without the anti-malarial drug quinine and its derivatives? As former JCB fellow Matt Crawford tells us, the answer is almost too terrible to contemplate. In the early 19th century, two French pharmacists isolated quinine from cinchona bark (also known as quina, cascarilla, and the Jesuit’s Bark), a medicinal tree bark from South America. Before that, the globalization and commodification of cinchona bark were processes intimately intertwined with European colonization of the Americas. Three primary sources recently acquired by the John Carter Brown Library –  Metodo sicuro d'ordinare la china china; L'Efficacia della china china esposta alla pubblica considerazione per vantaggio universale; Memoria sobre las ventajas y utilidades de la quina buena, y perjuicio de la mala... – attest to the intense interest Europeans took in the bark, and the deep historical ties between (early) modern medicine and European imperialism. Judging by their titles, these works emerged from the debates over the “efficacy” of cinchona bark, the “advantages” and “dangers” of different kinds of bark, and the most “secure method” for using the bark therapeutically.

The acquisition of these sources further strengthens the JCB’s profile as a key institution for scholars interested in the history of science and medicine in the early modern world, and will allow future scholars to deepen their understanding of the economic, epistemological, and epidemiological consequences of cross-cultural encounters through new histories of this early modern wonder drug.

NOTE: AUTHOR: - Matthew Crawford, a Barbara S. Mosbacher fellow in 2011-12, is the author of The Andean Wonder Drug: Cinchona Bark and Imperial Science in the Spanish Atlantic, 1630-1800