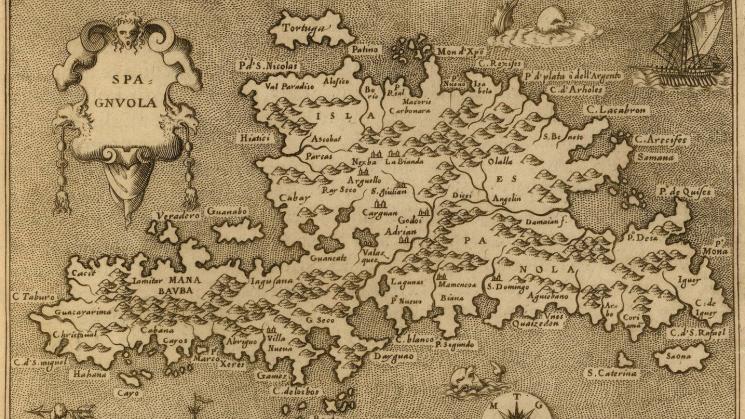 The Renaissance cartographic genre of isolarii is one that appeals to every map lover. These Florentine and Venetian island books combined textual geography, ethnography, history and travel narrative with the cartographic depiction of islands. The islands treated by this genre were most often those of the Mediterranean and the fringes of Europe until the sixteenth century, when isolarii began to include maps of ‘American’ islands.

Brown University professors Carole Maso and Amy Remensnyder brought their wide-ranging and interdisciplinary History/Literary Arts seminar “Islands of the Mind” to the JCB recently to view a selection of the isolarii in JCB collections, among which are several editions of Tommaso Porcacchi’s L’isole piu famose del mondo. The first, 1572 edition of this work was the first isolario to use copper plates. Engraving the maps on copper plates permitted the engraver, Girolamo Porro, to achieve much greater clarity and accuracy, thus allowing for more detailed cartographic depictions of islands’ coasts and interiors, as well as of the sea monsters, ships, water gods and cartouches present in the 1576 image of Hispaniola shown here. Porcacchi wrote the substantial texts that accompanied the maps as well as the preface to his isolarii. Although in the latter, he drew on ancient history and mythology to explain the relationship between continents, islands and the water that covered the earth, Porcacchi was also concerned with current events and describing in detail recent European discoveries outside of Europe. This mix of what appears to us as the fabulous and the very real is a defining element of the genre, and certainly a large part of its great appeal.