A Tale of Two Indians 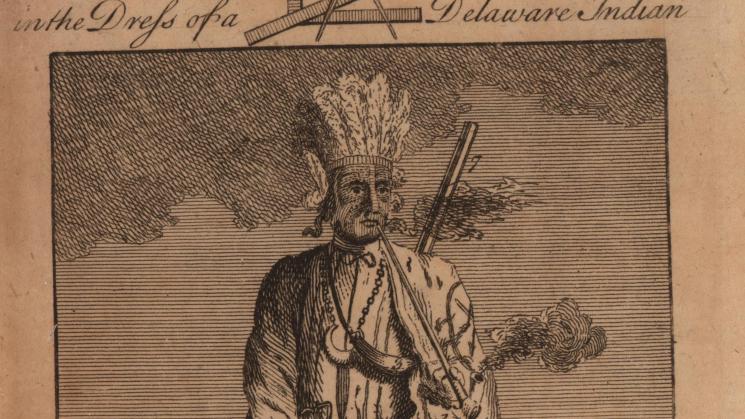 The image below is the frontispiece to one of the most well-known Indian captivity stories. It shows Peter Williamson in the dress of a Delaware Indian and illustrates the book he wrote titled, French and Indian cruelty: exemplified in the life, and various vicissitudes of fortune, of Peter Williamson..., London 1752. Here we see what appears to be a Delaware Indian in fascinating detail. Wearing a feathered headdress, wampum belt, gorget, and moccasins and carrying a gun or musket and a scalping knife, the man smokes a hatchet pipe while standing before a group of dancers and men paddling a canoe. The ethnographic details seem authentic–from the hatchet pipe he is smoking to his powder horn. But the image we are looking at has a more complex tale to tell. 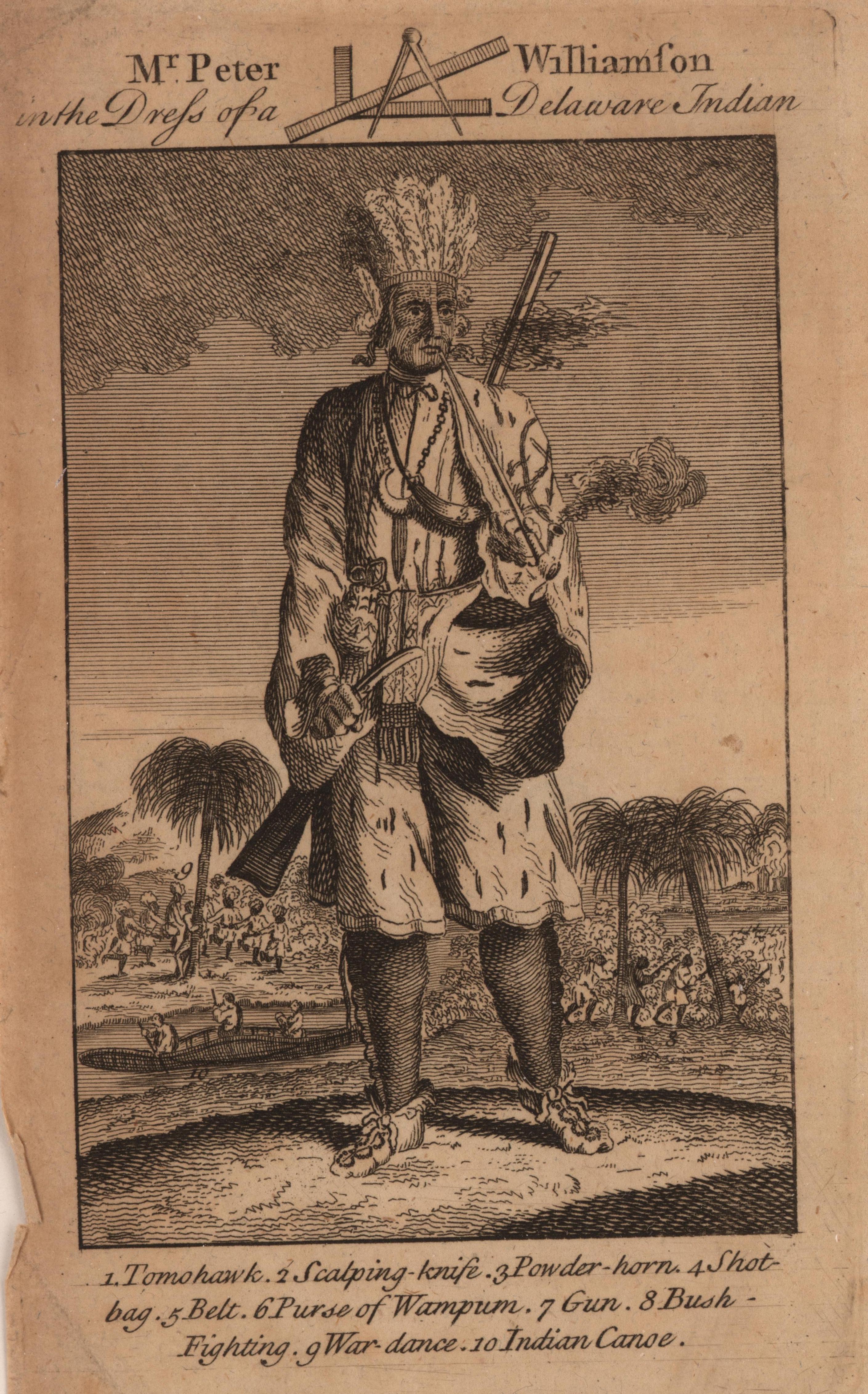 Peter Williamson’s story is an interesting one. His book tells of his capture in Aberdeen, Scotland, by a professional gang who ran a lucrative business selling indentured servants to America. The story encompasses shipwreck, rescue, slavery, manumission, marrying an heiress, capture by brutal Indians, escape from same, enlistment in the British army, grueling fighting and grievous wounds, capture by the French as a prisoner of war, and exchange back again to the British Isles. The publication of the book gave Williamson the wherewithal to proceed back to Scotland where he successfully prosecuted his kidnappers, compiled the first city directory of Edinburgh, established the first penny post there, and kept a tavern where he was known as Indian Peter. He often, it was said, dressed up in his Indian finery for his customers. The details of his account have been questioned by scholars; he wrote his book to raise money and, without doubt, embellished it greatly. Nevertheless, Williamson's narrative was very popular at the time and served as a model for other captivity narratives.

Shown below is another image from a book published in 1766. Here it is used to illustrate “A Delaware Indian. with his Tomohawk scalping knife, &c.” and was printed as the frontispiece to Pierre-François-Xavier de Charlevoix, A voyage to North-America: undertaken by command of the present King of France, Dublin, 1766. Clearly closely copied from Williamson’s image, this image seems be a factual depiction of a Delaware Indian. (That the images are reversed only supports the fact that one of the images is directly copied from the other–tracing a print onto an engraving plate would reverse the copied image when printed.) 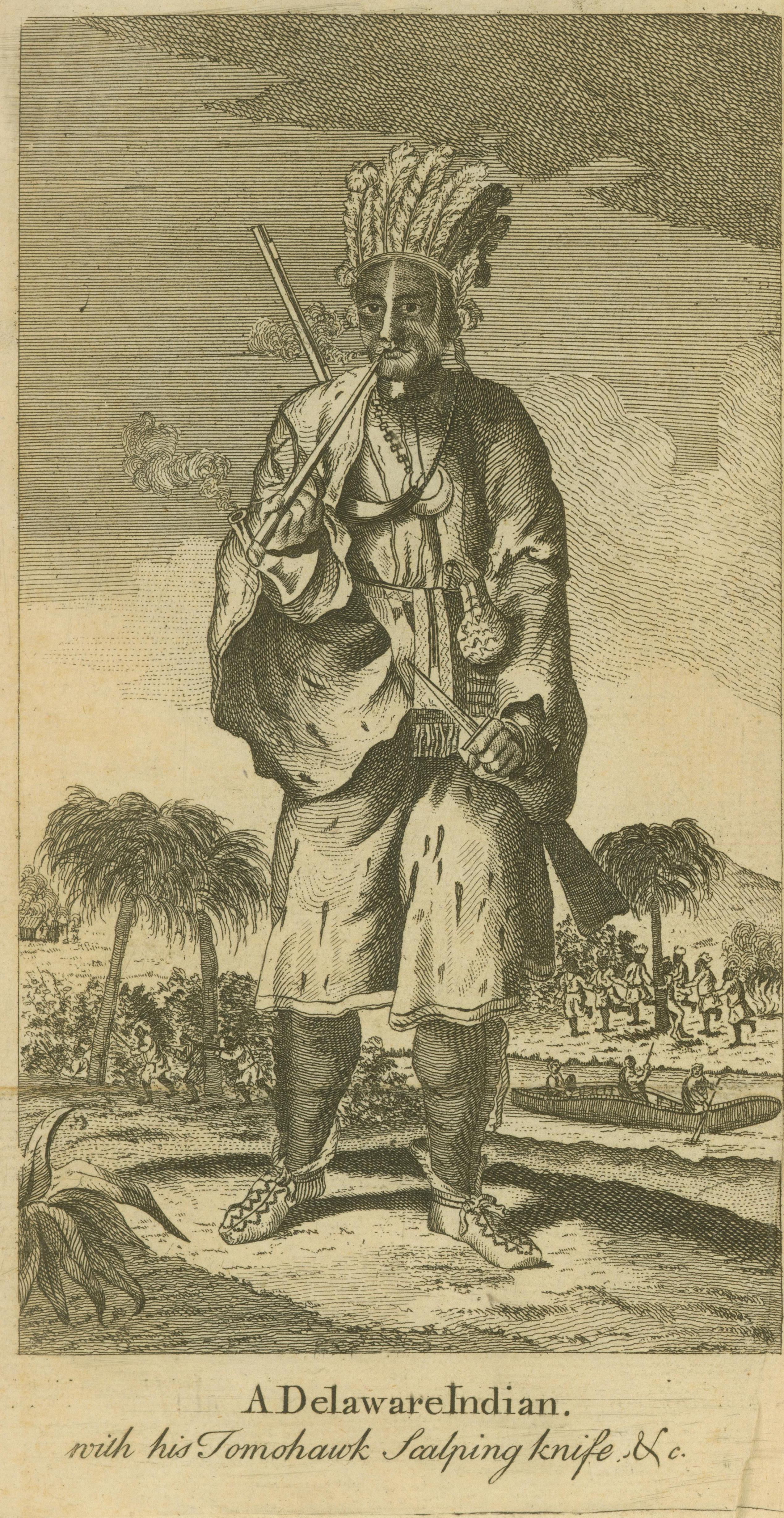 This image of an actual Delaware Indian, however, was seemingly printed fourteen years after the image showing Peter Williamson in Indian costume. How authentic is the depiction of the Delaware Indian, one wonders? Was Williamson's illustration taken from an earlier image? Are the cultural details revealed in the images realistic or do they reflect a European's notion of how a Delaware Indian would be attired? Promulgating more questions than answers, these two images are, nonetheless, fascinating for questions they raise.