Early Mexican Imprints at the JCB 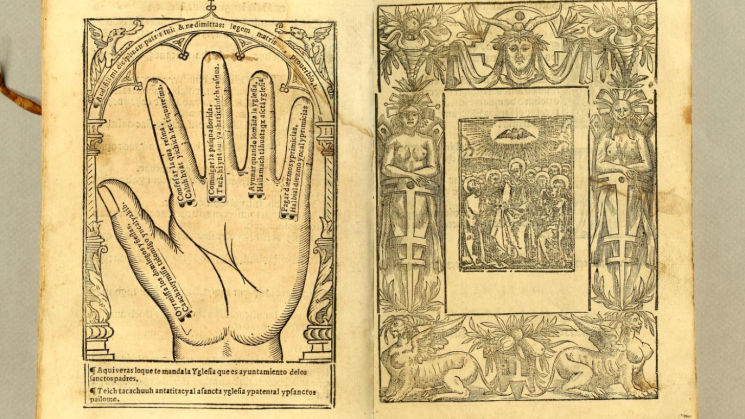 The earliest products of the printing press in the Americas form an extraordinarily rich subset of the JCB collection, and we can learn so much from them. Books printed in Mexico in the 16th century attest to the violence of political and religious transformations, epistemic exchanges, rich linguistic environments, educational goals of the elites, and new legal frameworks. What was the performative life of these early books: were they meant to be read out loud, shown and shared with the natives, explained, studied, sung, translated, carried into remote communities, used in ritual ceremonies? What can we learn about sixteenth-century readers from marginal annotations and about previous owners from fire brands and ex libris? How did Indigenous people participate in the creation of the content and the manufacture of the books? What are the priorities and anxieties of the civil and religious authorities as expressed in the preliminary pages?

Last summer I spent two weeks immersed in a study of the 65 early Mexican imprints preserved in the JCB published  from 1544 through 1600. They make up a multilingual collection written in two European languages, Spanish and Latin, and five Amerindian languages: Náhuatl, Purépecha, Zapotec, Huastec, and Tzotzil.

Religious titles comprise the majority of this corpus (42 titles). An instrument in the process of conversion to Christianity imposed by the Spanish colonizers, these books range from primers and short catechetical works for beginners, to more elaborate explanations of Christian doctrine, sermons, confession manuals, psalms, and mysticism treatises. Another subgroup consists of textbooks for higher education, printed to introduce students of the Royal University and other schools to the study of Latin, Logics, Physics, and Cosmography. Other subjects include medical treatises, legal compilations, naval engineering, military strategy, and tax collection.

The printing press was instrumental in the endeavor to codify indigenous languages. Linguistic works in the JCB collection of early Mexican imprints were written to facilitate the study of three widely spoken languages: Nahuatl, the lingua franca of the New Spain in the 16th century; Purépecha, also known as Tarasco, the language of the kingdom of Michoacán; and Zapotec, spoken in the region of Oaxaca.

*I look forward to adding a blog entry devoted to early Peruvian imprints in the JCB collection.