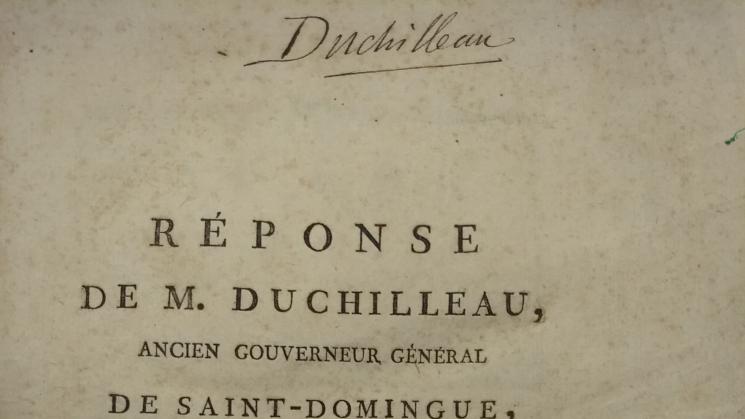 In the revolutionary spring of 1789, France and its colonies were undergoing separate although intertwined political and economic crises, and the JCB just purchased a key document that sheds light on the rapid development of one of these crises. Because of its recent explosive growth, France’s most valuable colony, Saint Domingue (Haiti), was living through a period of intense food scarcity in the late 1780s. To combat the inadequate food supplies both grown locally and imported from France, and in response to planters’ ambitions to expand their enslaved workforces, Marie-Charles Du Chilleau, the governor of the colony, issued an ordinance allowing the legal importation of African captives and flour from non-French merchants in 1789. He was immediately dismissed and recalled to France (where he would die during the Terror), but sought to defend himself against his detractors: the Naval Minister and the colony’s intendant. While already possessing several pieces of the fiery exchange that reveal the unfolding drama, the JCB just purchased Du Chilleau’s final letter of self-justification sent to the revolutionary National Assembly in 1790, in which he attempts both to defend and vindicate his actions.