As libraries continue to develop the power of digital technologies for archiving and outreach, scholars are leveraging these platforms for language valorization and community building across continents. The JCB recently hosted Dr. Brook Danielle Lillehaugen, Associate Professor and Chair of Linguistics at Haverford College, and Dr. Felipe H. Lopez, a native Zapotec speaker from the town of San Lucas Quiaviní, Oaxaca and UCSD post-doc, to share a project based on Zapotec revitalization.

The endangered status of Zapotec, a family of languages indigenous to southern Mexico with a time depth comparable to the Romance languages, motivated the development of the Ticha Project. Ticha is a digital explorer for annotated colonial Zapotec texts, which includes a Zapotec-English dictionary paired with audio recordings of modern cognates, representing spoken Zapotec in multiple regional varieties. Over the course of several years, Ticha has used grammatical software to generate resources for scholars and Zapotec communities alike, creating translations that are accessible and meaningful to local Zapotec speakers. The project relies upon colonial-era indigenous language texts and ethnographic records that were produced as a result of encounters between European missionaries and native Mexican groups. Some of these materials were grammars produced with the intention of converting indigenous populations to Christianity. One example of such works is the Arte en lengua zapoteca by Juan de Córdova, made digitally available by the JCB, which was the first item Lillehaugen integrated into the online platform.

But the online world where this platform lives is not the only place this language work goes on. In-person collaboration between Mexican and international researchers and Zapotec academics and community members in the Mexican state of Oaxaca, and the diaspora, help produce a multi-faceted understanding of this endangered language family and the colonial texts used for preservation and valorization. The network behind this project operates in a cyclical and collaborative process with Zapotec speakers that prioritizes the effort for language preservation at every step. Digitized materials spur the process as they allow easy management of texts for analysis and access for all team members. Once this is accomplished, the effort to transcribe, parse out the content, and define vocabulary begins.

These analyses often take place in community spaces in Oaxaca where multiple generations of indigenous Zapotecs gather to transcribe texts, take turns dictating words, and share other input. Ticha is intentional in promoting this inclusive process as it partners with indigenous Zapotec activists and scholars across Oaxaca to preserve their knowledge and validate the importance of their culture. This interdisciplinary work incorporates methods from anthropology, linguistics, and history to deconstruct colonial texts for contemporary needs for Zapotec scholarship.

There are only about 450,000 Zapotec speakers today, and the population of young speakers of Zapotec is declining. Ticha serves as a tool that connects modern speakers to a history written in Zapotec, supplemented by specialized commentary and pronunciation that provides important context. By generating new content for users as quickly as possible, Ticha effectively builds a rich resource for Zapotec speakers in real time, even if documents are only partially transcribed or translated.

Discrimination against indigenous peoples and their languages in Mexico and elsewhere throughout the Americas means that tools like Ticha – which empowers Zapotecs to engage with materials, work on their own terms, and provide feedback at all stages of development – are even more urgently needed. As the JCB celebrates the digitization of 20% of our materials, we also uphold the use of social media and platforms like Internet Archive and Luna to work towards making our collection completely accessible. 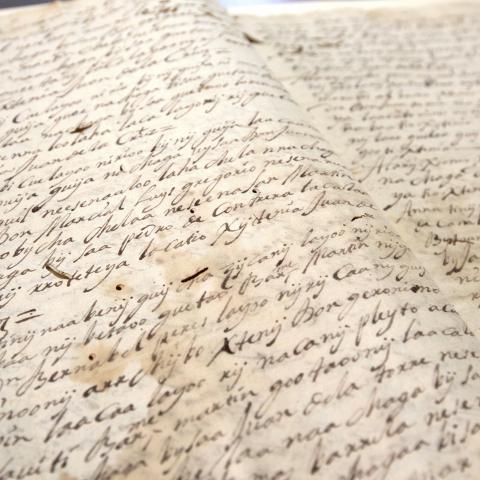