In mid-September, 2019, the JCB partnered with the Embassy of Colombia in Washington, D.C. to celebrate the anniversary of the Battle of Boyacá, a military struggle on 7 August 1819 that definitively vanquished royal Spanish troops and which officially marks Colombian independence today, 200 years hence. During the day-long visit, the Library displayed a portion of its extraordinary collection of materials on early Colombian history.  The materials shared in Washington – expertly narrated by former JCB fellow Cristina Soriano (Professor of History at Villanova University) – are now displayed in this digital exhibition celebrating the bicentenary of Colombia's independence from Spain, including documents from Alexander von Humboldt's astronomical observations (and those of his Colombian counterparts) to maps of the newly independent republic. The JCB is grateful for the collaboration of Ambassador Francisco Santos and his extraordinary "equipo" in Washington. ¡Gracias, y felicidades, Colombia! 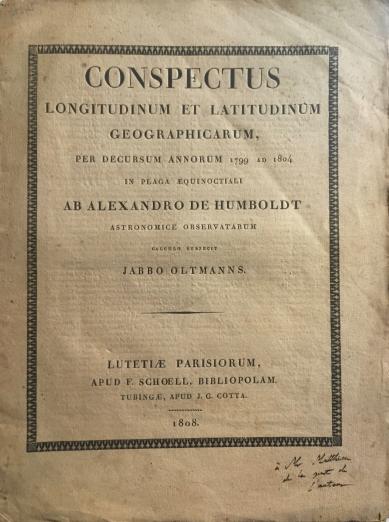 While the world celebrated the 250th birthday of the polymath Prussian Alexander von Humboldt,  born on September 13, 1769, we are reminded how much Humboldt was reliant on South American – and especially Colombian – predecessors. Here, we see Humboldt’s astronomical observations side-by-side with those of the engineer Carlos Cabrie and José Antonio Caldas, whose scientific theories – elaborated on Colombian soil – are thought to have profoundly influenced Humboldt’s theories of biogeography and climate science. This document also contains a prospectus of the printed works that would begin to be published by Humboldt in Paris following his return to Europe in 1804. 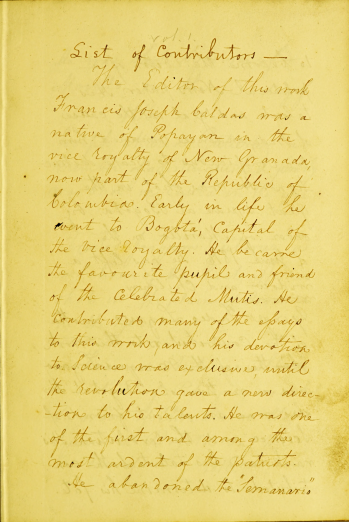 An extraordinary Enlightenment figure, Caldas was a disciple of the great Spanish botanist José Celestino Mutis and, according to the handwritten preface (in English) to this bound volume of his famous periodical, Mutis’s “favourite pupil.” The writer includes notice of Caldas’s assassination by royalist troops in 1816, and a litany of other murdered revolutionaries as well. The work itself is a paean to the love of science in Spanish America, ranging from geography to meteorology. The meteorological tables are a good example of the abiding interest in early environmental history in the Americas, and the possibility of understanding how the relationship between humans and the natural world formed in the later years of the colony of New Granada. 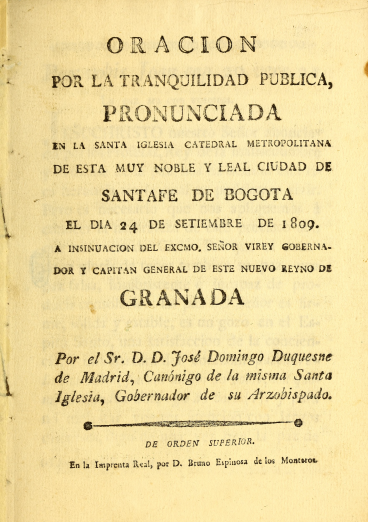 In 1808, Napoleon's forces occupied Madrid and exiled and imprisoned the Spanish king, Ferdinand VII, in France. This episode unleashed a political crisis that profoundly affected the Spanish Monarchy and its American territories. The fear of the spread of radical revolutionary ideas, anti-monarchism and anti-religion of previous years, emerged again during the Spanish Monarchical crisis. Religious leaders in different regions of South America, such as José Domingo Duchesne in new Granada, felt the need to express to the general public the “Dangers of the Revolution.” This sentiment went along with the political need to protect the rights of the Spanish King. Political and religious concerns represented a relevant force in shaping the character of the emerging local juntas. 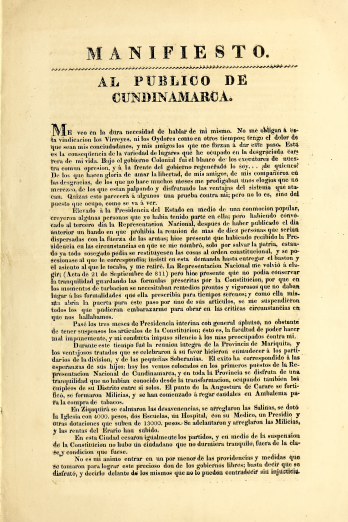 The Free and Independent State of Cundinamarca was a rebel state in colonial Colombia, which replaced the Spanish colonial Viceroyalty of New Granada from 1810 to 1815. Its capital was Bogotá. Following Spain’s occupation during the Napoleonic Wars, Cundinamarca was one of the states (including Argentina and Venezuela) that replaced its viceregal government with a local junta in the name of the deposed monarch Ferdinand VII. The first president was Jorge Tadeo Lozano, but Antonio Nariño forced his resignation and replaced him. Cundinamarca was initially conceived as an enclave of the Spanish kingdom, but full independence was declared in 1813. While Cundinamarca advocated for the establishment of a strong centralist government, other parts of the old viceroyalty supported a federal structure. The region remained embroiled in civil war until the defeat of a Cundinamarcan expedition against Quito allowed General Simón Bolívar of the United Provinces to force terms in December 1814. By mid-1815, however, the region returned to submission under Ferdinand VII. 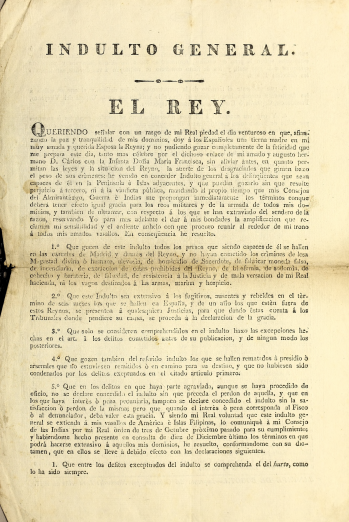 In the years of 1815-1819, the re-established Spanish Monarchy – only recently recovered from the Napoleonic invasion – attempted to regain political and military control of their overseas territories. The process of restoration of monarchical rule in New Granada was extremely difficult; during this period, different political groups emerged and confronted each other, creating new alliances and different political measures that responded not only to the Viceroyalty’s local circumstances but also to crucial changes in Spanish rule. By 1816, the King’s military expedition entered Bogotá and regained control of the Viceroyalty of New Granada, and the King decided to pardon the majority of men who had previously committed to the revolution, hundreds of whom were able to briefly become vassals of the King without major repercussions. 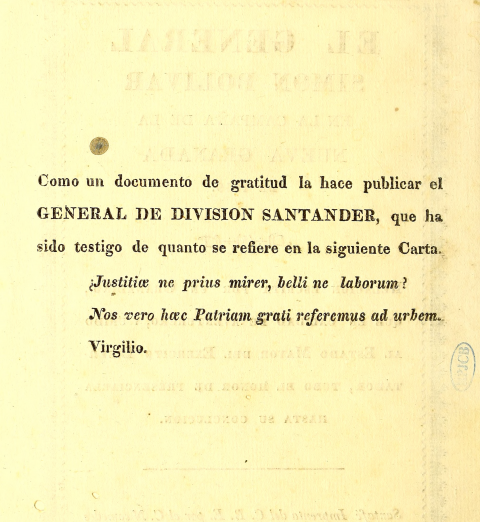 Like many other officers who had joined the army to defend Independence, Francisco de Paula Santander retreated to the plains east of the Cordillera Oriental during the period of the “Restoration.” There, Santander joined forces with Venezuelan patriots and operated under the command Simón Bolívar, who promoted Santander to Brigadier General during a military campaign in 1817. Santander was one of the battlefield commanders during the republican victory at the battle of "el Pantano de Vargas" in 1819 and later that year at Boyacá, the battle that marked the definitive independence of Colombia. Although differences and disagreements emerged in the 1820s between Santander and Bolívar, this detailed and beautiful written military memoir by Santander describes the Campaña de la Nueva Granada and the incredible efforts made by both men to bring definitive independence to New Granada. 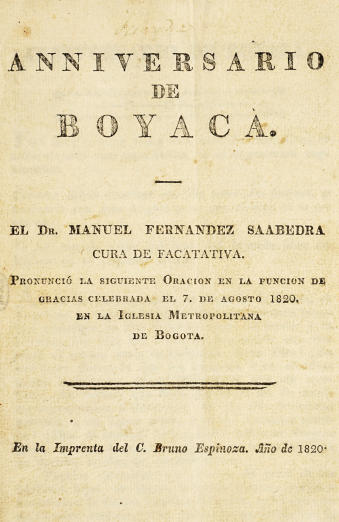 On August 7, 1820, the first anniversary of the Battle of Boyacá, Dr. Manuel Fernandez Saavedra gave a learned discourse at the Metropolitan Church of Bogotá. In it, he proclaimed the liberation of the “oppressed peoples beneath the iron scepter of the barbarous sons of Iberia” and extolled a model that would allow a nation to “extend itself across a wide and productive territory” without interference from enemies external and domestic: “¡Quanto, pues, debemos al memorable BOYACA!” He ends the discourse congratulating his fellow Colombians for their constancy and valor and entreating them to live by an “exact morality of customs,” enshrining a religious order within the newly independent nation that had just been born. 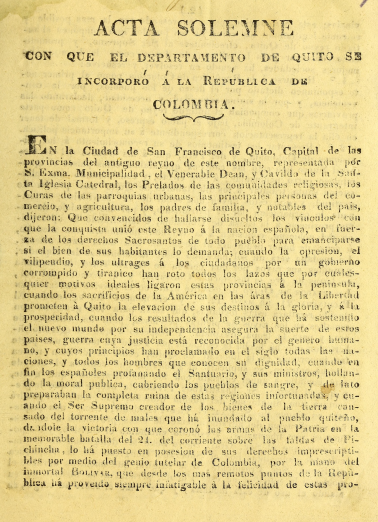 On May 24, 1822 the province of Quito sealed its independence in the Battle of Pichincha, and this document cemented the incorporation of Ecuador into La Gran Colombia. Proposed in this document is also a series of commemorative objects, including a medal of a sun rising between the mountains of the Equator and a pyramid on the field where the battle of Pichincha took place, hearkening back to a French and Spanish scientific expedition in the eighteenth century that used the Audiencia de Quito as the laboratory for a geographical expedition to study the shape of the earth at the Equator. 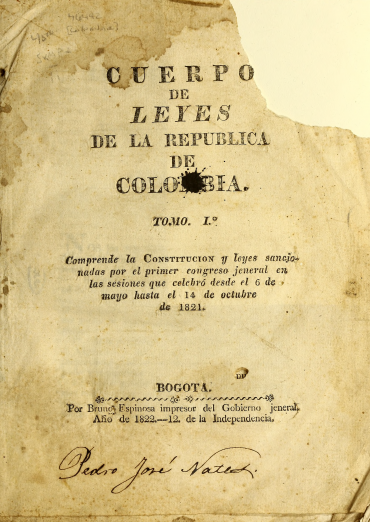 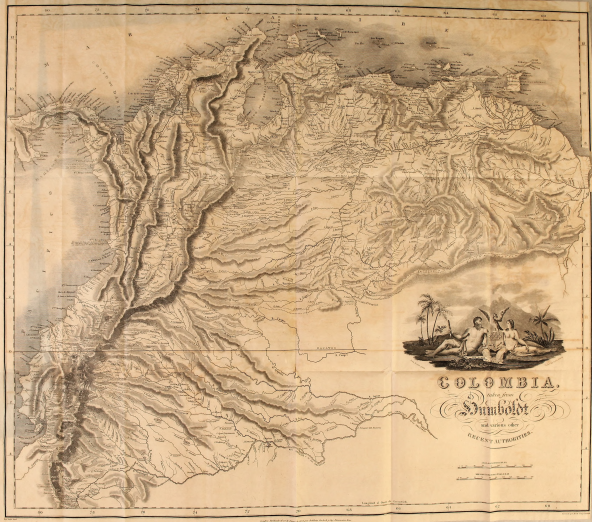 Letters written from Colombia, during a journey from Caracas to Bogotá and thence to Santa Martha, in 1823.

The John Carter Brown Library has one of the most extensive collections of travel literature to the Americas during the colonial period, and this series of letters written from Colombia – and attributed to the British naval officer Basil Hall (1788-1844) is noteworthy not only for its florid descriptions of the route from Caracas to Bogotá, but also for its elegant map of the region based on the earlier work of Alexander von Humboldt. This map, like Restrepo’s atlas, reflects a modern vision of South America that slowly emerged following the period of Colombian independence, but was in fact based on geographical and natural historical treatises that hearken back well before Humboldt himself.

Letters written from Colombia, during a journey from Caracas to Bogotá and thence to Santa Martha, in 1823. London: 1824. [Complete digital reproduction here.] 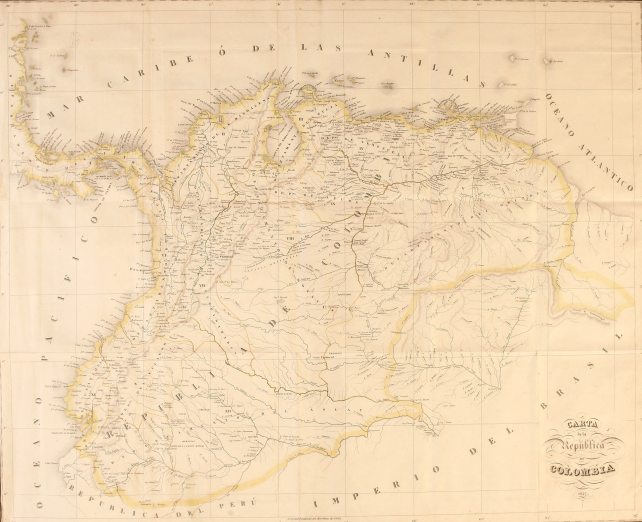 The JCB held all ten volumes of Restrepo’s famous series on the history of the independence movement in Colombia – acquired by the Library in 2005 thanks to a bequest from the estate of Maury A. Bromsen, a Boston bookdealer and long-time friend of the Library – but it did not hold the atlas until 2018, when a book dealer made us an offer. According to the Colombian-American scholar (and former JCB fellow) Lina del Castillo (UT-Austin), Restrepo’s project was intended to highlight the reality of Colombia’s revolution and serve as a visual aid for the textual account. The introduction to the atlas explained how the updated territorial divisions that the atlas displayed were complemented by details of the principle battles of independence. In the model of Caldas, Restrepo offered his readers an assessment of Colombia’s climate, topography and natural products.