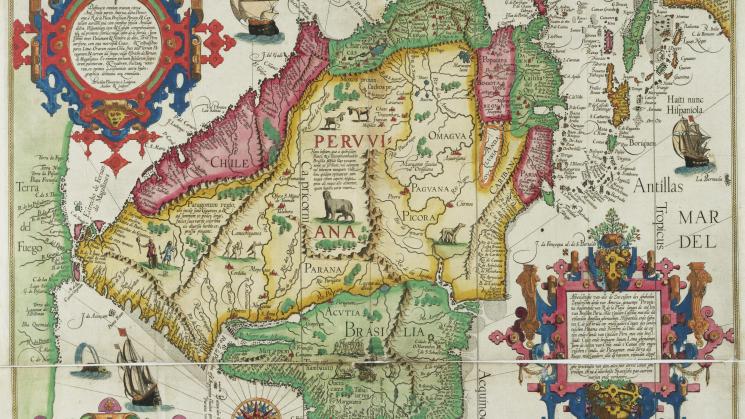 One of the most common formats of historical maps is that of maps found inside books, as opposed to separately-issued maps or maps in atlases. These maps are ubiquitous – at the JCB, we calculate at least 10% of our books contain maps - but often fly under the radar because they can be overshadowed by the book in which they appear, or they are familiar primarily to those who know the books well.

One such map that emphatically does not fly under the radar is the spectacular map of South and Central America issued in Jan Huygen van Linschoten’s Itinerario, voyage ofte schipvaert, van Ian Huygen van Linschoten naer Oost ofte Portugaels Indien…, published in 1596 in Amsterdam by Cornelius Claesz. The map, entitled “Delineatio Omnium Orarum Totius Australis Partis Americae …” was engraved by Arnold Florent van Langren, and the JCB copy is in magnificent full color. 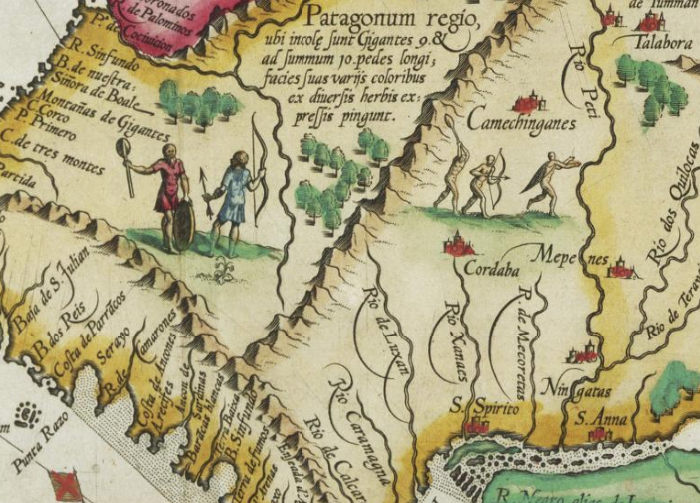 The “Delineatio Omnium Orarum Totius Australis Partis Americae …” is a cornucopia of geographical detail and textual narrative in four European languages, in addition to indigenous toponyms: an elaborate cartouche in the upper left of the map contains the map’s title in Latin, and a second, equally elaborate cartouche in the lower right in Dutch describes in more detail the lands depicted by the map. Spanish and Portuguese place names appear throughout the map, and geographic details are described within the map in Latin. An ornate compass rose in the bottom right shows us that the map is oriented with north to the right, and the lands it contains extend northward to the Caribbean and Florida. To the South, we see the substantial landmass of ‘Terra del Fuego’ across the Strait of Magellan. In fine sixteenth-century style, the map is characterized above all by extensive decoration: sea monsters and sailing ships in the oceans, and mythical creatures and scenes illustrating European fantasies of indigenous life in the interior, which is divided into the realms of Peruana, Chile, Peruvia, Castilia del’Oro, Nova Andalusia, Paria, Popaiana Bogota Regnium and Brasilia. The Pacific and Atlantic coastlines, as well as those of Florida and the Antilles, are marked by an unbroken chain of toponyms naming every geographic feature the mapmaker could evoke. 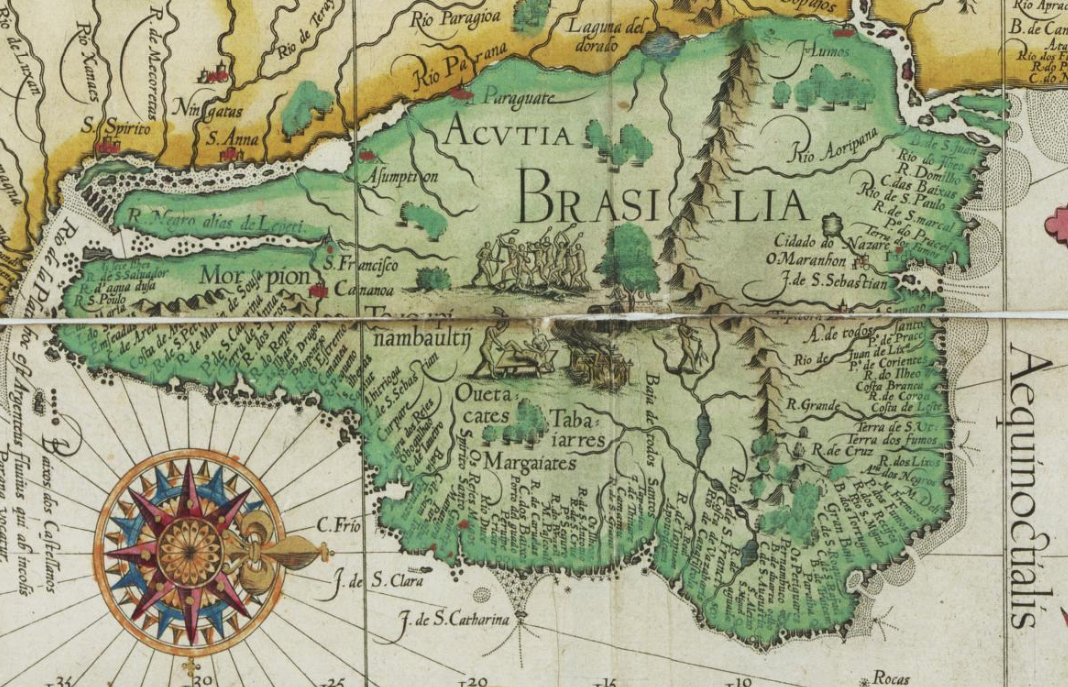 But which mapmaker? The relationship between this map and this book has many layers, as if often the case with maps in books. Van Linschoten himself never crossed the Atlantic or visited South or Central America, and the Itinerario was primarily focused on India, so where did the map come from, and what was the source of both the geographic information and the decorative elements? The Dutch cartouche gives the clue, stating that the information derives from “… the very best Spanish maps.” In fact, Van Langren, the map’s engraver, created this map based on, and collapsing into a single map, two maps of South America that had been produced only a few years earlier by Petrus Plancius, the Dutch cartographer and astronomer who knew well Cornelius Claesz, Van Linschoten’s publisher, (the JCB also owns one of these two maps - Link). Plancius himself had access to, and was dependent on, Spanish and Portuguese geographic and hydrographic information, which informed his map, and, in turn, formed the basis of the “Delineatio Omnium Orarum Totius Australis Partis Americae …” appearing in Van Linschoten’s Itinerario on the behest of Claesz. In this way, a small circle of Dutch and Flemish authors, cartographers, engravers, and publishers all played differing roles in determining which map of South America appeared in the Itinerario, the map’s appearance and what geographic information it would contain, adding to the complexity of this map in a book.