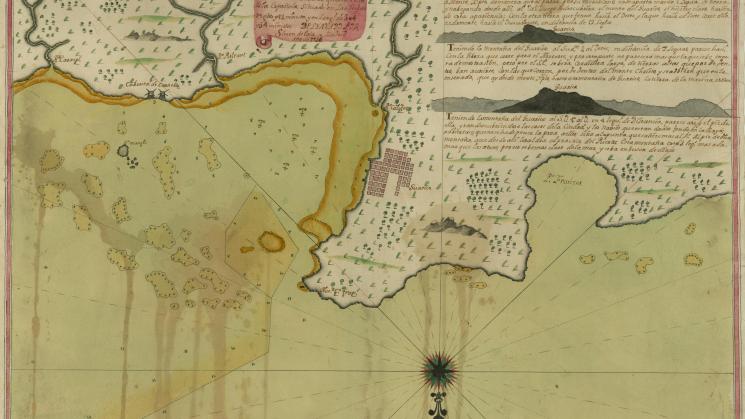 The JCB’s cartographic collections contain a significant number of manuscript maps, which often tell a very different story about place-making in the early Americas than those maps that entered into the circuit of print. One such manuscript is a large, beautifully colored chart made in 1736 in Madrid by Spanish mapmaker and ship captain, Simon de Evía, of the northern coast of Hispaniola. De Evía is perhaps best known for another chart, a coastal reconnaissance of Louisiana that he made in the same year, and for his son, José de Evia, who followed in his footsteps to become a cartographer and naval officer in the Spanish Royal Armada.

De Evía’s map of Hispaniola coastline focuses on what he calls in the cartouche ‘el puerto de Guarico,’ although the toponyms ‘Nue. co. fran.’ and ‘Po Franzes’ point to the name by which the town was better known, Cap Français, in the French colony of Saint Domingue. The colony had been formally French for almost 40 years by 1736, and the map clearly shows the embryonic grid pattern of the city that would become, in another fifty years, the wealthiest and grandest commercial center in France’s Atlantic empire. In clearly demarcating anchorages, soundings and sand shoals, and drawing an elaborately decorated compass rose, de Evía has, however, presented a ship-board view of the port, not an urban plan. Three delicately drawn inset coastal profiles of ‘el montaña Guarico’ complete a depiction of the port that clearly served maritime purposes.

Is this elusive view of the emerging French port and its mountainous setting, using the indigenous name ‘Guarico’ that the Spanish had always preferred, connected to the growth in trans-imperial smuggling with nearby Spanish colony of Santo Domingo? The many voices of this map conceal any obvious answer.