At the top of this hand-colored manuscript map of central Mexico drawn by Zúñiga y Ontiveros — a well-known hydraulic engineer, printer, surveyor, scientist and author — the sun is rising in the east between a set of snow-capped mountains (Sierra Nevada) and a snow-capped volcano. This volcano is the source of multiple tributaries which join to form a single river running mostly westward into Lake Chalco, down to the bottom of the map, between the pueblos of Ayozingo and Huitzilzinco, in the southeast Valley of Mexico. While the map shows the location of two dams along the route of the tributaries and river, its main function is to show water usage at multiple points along the course. The map was almost certainly drawn to illustrate one or more claims to water rights, and possibly to accompany a lawsuit filed for the same purpose. 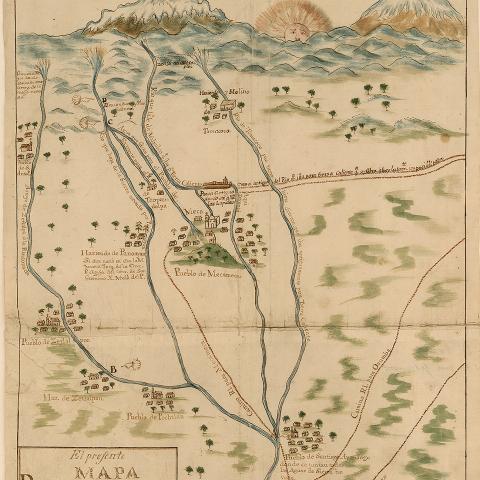